No scientific article, no matter its depth or breadth, presents the last word on a given subject. Any investigation, while aiming to dissipate certain doubts, will raise others. More than an arrival point, it is a departure point for further research. This is the essence of the scientific method.

We hope that the studies presented in the issues of Brazilian Business Review – BBR in 2009 have lived up this rule. The conclusions and results do not end the discussion; they open horizons to discuss further problems.

What we want to stress here, besides the inherent inexhaustibility of all research, is that the purpose of BBR has always been more than just to publish articles. Its aim is to foster discussions and to present a forum to discuss a broad range of interrelated problems in the field of management, finance and accounting.

In this last issue of 2009 we present six more provocative articles to the scientific community. The first work is by Luiz Eduardo Gaio, Karina Lumena de Freitas Alves and Tabajara Pimenta Júnior. The authors use recent data to examine the efficiency of the Brazilian stock market. The results show that this market does not have the characteristics of a weak-form efficient market.

In the next article, Suliani Rover, Artur Felipe Ewald Wuerges, Eduardo Cardeal Tomazzia and José Alonso Borba analyze the effect of sunk costs on the decision process. Based on a study among students, they confirm the relevance of cognitive bias caused by sunk costs, evidenced by a lower probability of correctly answering problems when these involve sunk costs in the decision.

In the third article this issue, Gilmar Ribeiro de Mello and Valmor Slomski examine a current and interesting theme, public-private partnerships in the highway sector. Through primary and secondary data, they analyze the context in which PPP contracts arise in Brazil. The study suggests there is a relationship between the essence of the contractual subject matter and the legal form of the PPP contracts for construction and operation of highways in Brazil. The provisions of both Law 11,079/04 and Edict 614/06 limit the analysis of the essence of these contracts, inducing the prevalence of formal aspects over essential ones.

The fourth article, by Fábio Frezatti, Tania Regina Sordi Relvas, Artur Roberto do Nascimento and Emanuel Rodrigues Junqueira, is a critical analysis of management accounting in Brazil, from the perception of professors in the management area of postgraduate accounting programs. The authors find a significant convergence between the professors’ perception and the literature, mainly regarding user, focus of analysis and regulatory agencies, but some points remain relatively dissonant (other users, principles and relevant themes).

In the last article this edition, Larissa Vieira Zamprogno, Jaime de Jesus Filho and Bruno Funchal analyze how the degree of creditor protection and the existence of credit information systems influence the lending market of the countries making up the Mercosur trade bloc. The results indicate that although the effect is positive for all these countries, those with more developed credit markets are more sensitive to an increase both in creditors’ rights and the implementation of a credit information system.

As another year comes to a close, as always there is still a long path ahead. The doubts and questions do not end here. On the contrary, the end of this year is the base for a new start, or as T.S. Elliot aptly put it: In my end is my beginning.

We wish you good reading and plenty of success in 2010! 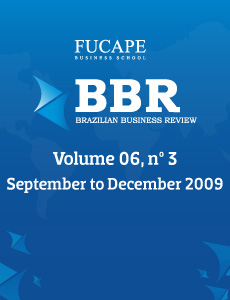